The Endermaster is the main antagonist of Minecraft Endventures. He rules The End and started an enderman revolution against the humans in an attempt to conquer the Overworld. He is voiced by Max Mucha.

The Endermaster was the child of a Griefer in the Griefer Shadowland, and was always messed by Griefers and got tormented. One day he was carrying a baby chicken while running from a group of Griefers chasing him, he eventually found the great wall that's made of bedrock which was made to imprison all Griefers. He also saw a lone Endermen there and he begged him to teleport the chicken to safety, the endermen saw his selflessness and realizes he's not a Griefer and thus shouldn't be here so teleports both him and the chicken to safety behind the wall. Afterwards the two become friends and The Endermaster names the Endermen, Endreai. The experience of living with Griefers also shook The Endermaster into believing all humans were like Griefers and thus grew a hatred for them. Later in The Endermaster's life he was a human scientist living in an NPC village and Endreai also visited him from time to time. Eventually He met a villager, which was one of Herobrine's minions in disguise, and traded an ender crystal with him, which he intended to use for an experiment that would make it work on humans and he told Endreai who was a bit concerned about thus. After four days of experimenting Endreai is more concerned and, the disguised minion came back to his house and gave him a potion which he claimed would help him in his research that had so far been a failure. The human Endermaster added one drop to the crystal which gave Endreai super speed, and when he then used the whole potion on the crystal it infused him with his powers and turning him into a enderman-human hybrid. The process knocked him unconscious and before waking up he was teleported to The End by Herobrine. Upon regaining consciousness, he killed the Enderdragon and tried to return home through the portal it left behind. However, it didn't work for unknown reasons. Realizing he would be stuck in The End until he found an alternate way out, or perhaps for the rest of his life, he decided to make himself the new ruler of The End and always have a grudge against Humanity because of his past experience with them. Eventually the endermen began to consider rebelling against him, and to contain the situation he hatched the Enderdragon's egg and raised the hatchling, Endaria, since endermen have great respect for Enderdragons due to having been ruled by one for as long as anyone can remember. While she may have started out as a way to maintain the loyalty of the Endermaster's people, he gradually started loving her as his own daughter.

Role in the Series

The Endermaster is the primary antagonist of Endventures. He is always lurking in the shadows, giving orders to his enderman minions. He is also in control of the Ender dragon named Endaria, his adopted daughter.

In the first few episodes, he is constantly watching over the protagonists and frequently trying to kill them. His past was also revealed in a book found in Colin's house, and he often got angry and attacked his own endermen. However, Willcraft later realized that he, just like everything in the first five Endventures episodes, was poorly made. Therefore, in Episode 6 after the long break from Endventures, he was remade. He is no longer stalking the protaginists, he barely cares about them at all. His only interest in them is to make Shadow his new general, but he stopped caring about that when Shadow was cured from his "Enderius Transformatio", the disease he gave him in order to turn him into an enderman. Later he wanted the rebellion city to get destroyed and tasked Endreai with it but he failed and The Endermaster had enough and so killed him (although Willcraft would regret this later). He promoted an Endermen named Wrecker to general and trusted him. He also wanted his daughter (Enderia) to destroy the rebellion city, when she was ready, The Endermaster sent her to the overworld in her dragon form, but he got angry when she failed to destroy the city and so banished her. The Endermaster then realized he should be so hard on her, he then witness the battle at the rebellion city and sees Wrecker getting beaten by Porkey, he decides to go help Wrecker by killing Porkey in the overworld. After the battle, he does criticize Wrecker for using resources on personal projects, he also rewards Wrecker and asks him what he wants. Wrecker requests to train with The Endermaster and he is pleased to hear he accepts it. The Endermaster wants him to hunt down the remaining humans and so does that. Wrecker returns with Katie and says that the remaining humans died, The Endermaster doesn't kill Katie since he wants to encourage Humans submitting to him, so he gives Katie magical powers as a sign of generosity. Later on, The Endermaster feels the death of his daughter Enderia and becomes furious, he summons Wrecker to know what happened which Wrecker fains ignorance and says that last he saw Enderia, she was speaking to Katie. So The Endermaster summons Katie who spills out the truth of what Enderia told her, The Endermaster says that she can avoid punishment if she brings The Endermaster a dragon egg and kills whoever killed Enderia. Afterwards The Endermaster explains that if Enderia's EXP can be acquired, he can reincarnate her into her own dragon egg, Wrecker is pleased to learn this information. Katie returns with a dragon egg and The Endermaster sets up a hatching ritual in one of the castle's upper towers. He then sends Katie to search for who killed Enderia. When the nether army arrives in the end, The Endermaster feels that it was The Wither King who killed Enderia, so the two of them start battling as The Wither King goes into his giant form and The Endermaster raises an obsidian pillar underneath him to keep up with his height. The Endermaster eventually kills The Wither King while getting heavily wounded in the process and collects Enderia's EXP, as this happens, Colin reaches the top of the pillar The Endermaster is on and confront him. Colin is using a powerful potion with a nether star in it, which makes him immune to The Endermaster's attacks. The both of them fight and The Endermaster loses, he floats up into the sky and explodes. Afterwards the Nether forces and Endermen establish peace as both of their rulers are killed, and both of them start to recover from the battle. Sometime after the battle, The Endermaster appears in the afterlife on a stone platform, Herobrine appears with a minion who speaks on his behalf, Herobrine explains to The Endermaster that he was one of his champions that would kill Lord Laskig after one champion killed the other. What happens after is unknown, but Enderia was revived by the Triplets after the battle and she thought out doing the favor to her dad and reviving him, The Endermaster would likely appear in the sequel series to Endventures which would include a lot of other characters from Willcraft's battle series. This series ultimately never took off and was cancelled once Endventures was put on halt.

Throughout the first part of the series, he is always obscured by darkness. In later episodes he is sometimes fully visible, while still sometimes remaining in the dark. His skin is the same as an enderman, his glowing purple eyes are shaped in a permanent scowl and he wears full obsidian armor with an ender pearl on his chest. He also wears a black cape with purple outlines and an obsidian crown.

He is very intelligent and strategic, and also shows an impressive amount of patience and serenity, as he always treats his endermen as if nothing bad has happened whenever they fail him, and he often has a backup plan or a solution whenever they do something wrong (Ignoring his terrible personality in the first few episodes). He does have a threatening side too, however. When Endreai got the blame for letting Colin, Shadow, Red and the others get away with one of their ships, he made it clear that if he didn't bring it back, things wouldn't end well for him. He kept his promise by burning Endreai alive. He also shows a lot of compassion for his adopted daughter, Endaria, and is driven by a desire to return to the Overworld with her but is also very protective and does not want to put that plan in motion until the greatest threat for her life, the humans, are eliminated.

The Endermaster possesses great ender-themed magic. Fortunately, his powers prevent him from leaving The End. He also has knowledge in non-magic battle arts. These are his known abilities:

The Endermaster on his obsidian throne 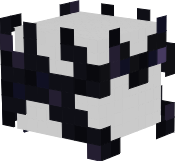 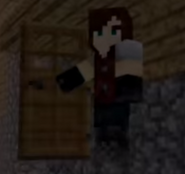 The Endermaster as a child in the Griefer Shadowland.

Community content is available under CC-BY-SA unless otherwise noted.
Advertisement